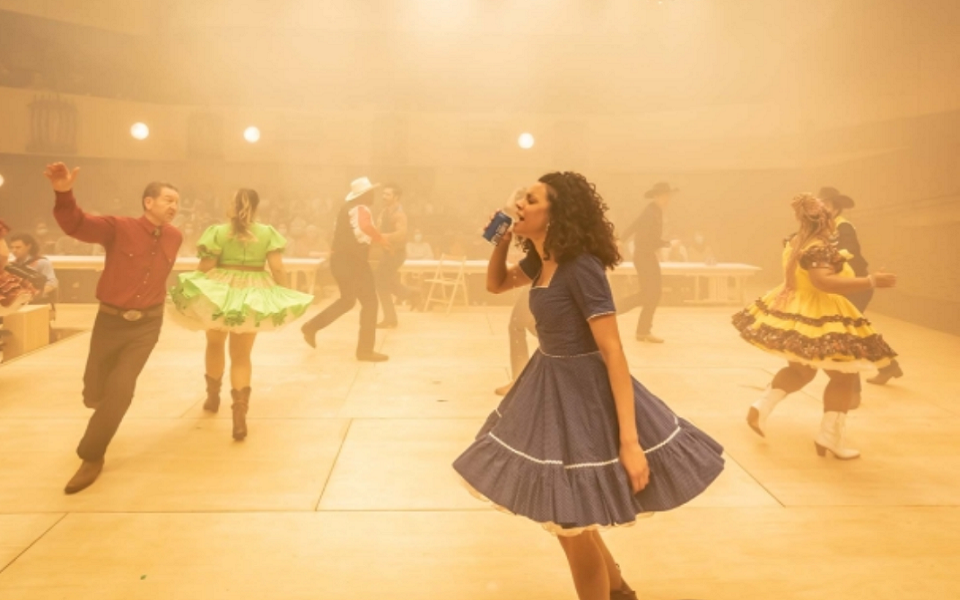 It’s not the best-kept secret in the world that Rodgers & Hammerstein musicals, such as South Pacific and The Sound of Music, are crisp as hell. Written over 75 years ago, musical naysayers would call them sexist and perhaps even say their songwriting is banal – but many have retained a level of fame and respect for helping write the musical rulebook in first place.

Oklahoma! certainly has. Of course, the script was criticized as, by contemporary standards, a linear experience of thinly sketched female characters swooning over much thicker un-sketched men. But everyone’s heard of Oklahoma!, which in part makes its 2022 comeback a big deal. (The latest West End revival dates back to 1998 and featured a young breakthrough called Hugh Jackman in the title role of the charismatic cowboy, Curly.)

Even more, this audaciously experimental production, which obeys none of the rules of a classic musical. Played mostly with the full bleed lights in the main space of the Young Vic, it feels more like watching a rehearsal than a polished finished product.

Staged in the round and set in rural Oklahoma in 1906, a series of cowboys and farm girls laze around discussing an upcoming dance party where it matters who you’re seen with. Curly woos local girl Laurey Williams, but he has competition from fellow farmhand Jud Fry. Traditional versions of the musical springboard emerge producing a cheerful spectacle about a farming community and men and women courting each other. (To be fair though, when Oklahoma! premiered in 1943, it was progressive for being one of the first musicals to use its numbers to advance the story.)

There are moments, however, that feel fragmented, as the winding backdrop of the rest of the story dips into segments that can’t offer the same energy or levels of freshness as the bold moments. The first 20 minutes, where Curly walks around flexing his macho muscles at Laurey, feels especially pedestrian, lacking the bravery seen elsewhere in this production.

And yet, the novelty of Fish and Fein shines brightly. There are two moments in the first act that prove musicals are a place to have tough conversations and be progressive. What’s most amazing is that they barely changed the original script, just twisted its meaning.

Marisha Wallace, from the West End production of Dreamgirls, gets the audience going with easily the best number, an exciting and sexualized version of “I Cain’t Say No”. The popular song about a woman in love with two men has a subversive edge, now told from the perspective of a woman who takes ownership of her sexuality and femininity. Wallace is stunning, roaring across the stage and grinding down both male and female characters. As she sings the lyrics to the title, she makes us believe that she’s happily fucked all of these people in the past 24 hours and has every intention of doing it all over again tonight.

Equally impressive but tonally disparate is the song Poor Jud is Daid, originally an ironic piece where Curly tries to convince Jud to kill himself after losing Curly to Laurey. (Let’s not begin to understand how weird that is.) This is drastically reworked and turned into a dark and thrilling exchange where Curly is holding a gun to Jud’s head. The audience is plunged from the illuminated rehearsal space into a darkness so black and terrifying that I clutched my notebook in my lap and couldn’t see my own hands.

I don’t like the rarity of lights going out in this version of Oklahoma! – frankly, stark lighting is hard to put up with – but when you play around with the lighting, it’s effective. They slowly step out of pitch black in the Curly/Jud showdown, revealing the characters to be sitting aggressively next to each other. With a third person on stage holding a flip-cam filming Curly’s menacing exchange, he blasts Jud with sharp threats. Their faces are projected high on the vast Young Vic wall behind them, 20 meters in height. Patrick Vaill, from the cast of Broadway 2019, has real tears in his eyes – his talent is an obvious addition to bring the pond for the UK run – he plays incredibly vulnerable.

Just as Jud senses a sense of danger, so does the audience. Similar to the style of shaky camera footage born out of The Black Witch project, Vaill and Arthur Darvill, who plays Curly, convey all the terror of what I imagine it was actually being threatened in 1906 in an earlier era to surveillance technology. Illegal threatening behavior harder to avoid.

It’s a shame that nothing lives up to that in the second act, especially the plot, which aside from the Curly/Jud story goes nowhere and takes its time getting there. And lead girl Laurey, played by Anoushka Lucas, never really gets her chance to shine. At the end, a band onstage sings the eponymous track and “Oh What a Beautiful Mornin,” but without a bells and whistles production, it sounds odd. When the rule book is torn, however – Oh, what a wonderful feeling.