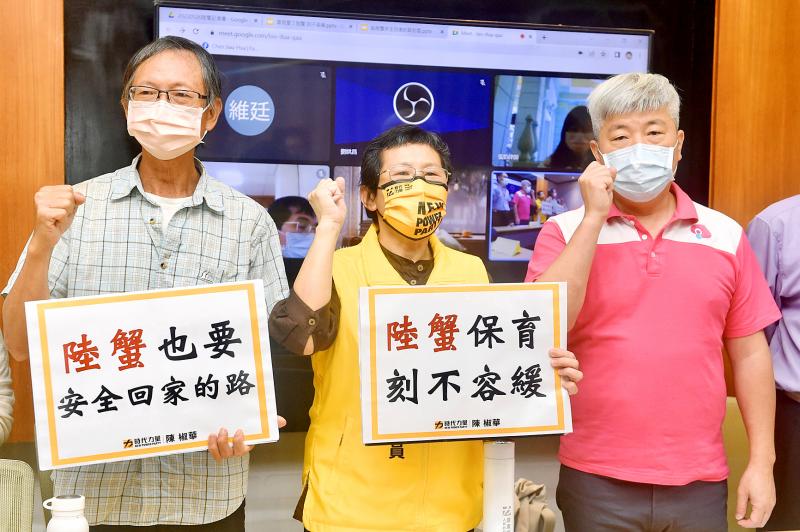 Animal rights activists on Thursday called on the government to consider the needs of land crabs before planning construction projects or maintenance work, as crabs in Kenting National Park (墾丁國家公園) are often at risk when they cross provincial road 26 to lay eggs in the ocean.

“Ecological assessment has been taken more seriously than before for road and river improvement projects, but there is still room for improvement,” Chen said.

For example, a road construction project carried out by the Branch of the Third Road Maintenance Bureau this year blocked the crab migration route, she said.

Former Taiwan Environmental Protection Union Pingtung office director Hung Hui-hsiang (洪輝祥) said Kenting is the habitat of most land crab species, but it was destroyed by the highway. .

Studies by Liu Hung-chang (劉烘昌), a Taiwanese land crab specialist, showed that between October 2018 and October 2019, 3,210 land crabs died on the 4 km stretch between Banana Bay (香蕉灣) and Shadao (砂島). Forty-five percent of those killed were female crabs carrying eggs.

Hung said the retaining walls and culverts along the highway, the tallest standing at 4m, built by the General Directorate of Highways were “ridiculous” as they were short and easily crossed by crabs.

Environmental groups hope sections of the highway at Banana Bay and the Gangkou River (港口溪) estuary can be raised to create ecological corridors for crabs, said the secretary general of the Taiwan Animal Protection Monitor Network, Ho Tsung-hsun (何宗勳), adding that it wouldn’t be too expensive.

However, raising the expressway would only have a limited effect, as local residents still have to use the road daily, Liu said.

Even ecological corridors built for the famous red crabs on Christmas Island, an Australian territory northwest of the mainland, have failed, Liu said, suggesting that trial corridors should first be built to explore the feasibility of the project.

The Soil and Water Conservation Bureau is looking to lower or demolish retaining walls along the Banana Bay section or replace them with temporary facilities, said Li Jheng-jhang (李政璋) , a land crab researcher at Kenting National Park.

Deputy Chief Engineer of the General Directorate of Highways Chen Chin-fa (陳進發) said he would instruct the Third Maintenance Bureau to improve the walls and gutters and request the bureau to undertake a thorough evaluation. environmentally sensitive sections prior to construction.

The agency currently has no plans to raise sections of the highway because consensus has yet to be reached on the issue, he said, but has promised to build a trial corridor this year. .

Comments will be moderated. Keep comments relevant to the article. Remarks containing abusive and obscene language, personal attacks of any kind or promotion will be removed and the user banned. The final decision will be at the discretion of the Taipei Times.